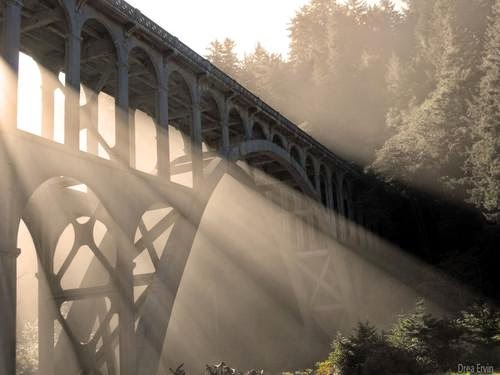 Fishing under the Valley Bridge, where I’ll take my son today,
beneath old wooden structure, in the shadows our rods will prey.

The dusty road ran down the canyon, was steep and full of turns,
but that didn’t stop our excitement, nor burden our return.

Our ancient village wonder, a monolith of sturdy claim,
wide arches on either end and Roman middle was its frame.

The aqueduct of Segovia, brilliance before us stood,
with seventy-two small arches, double stacked and made of wood.

The early morning sunrise, was gleaming in Northern Cali,
it gave our bridge a shadow, that hushed a sleeping valley.

Whistle sounds a-distant, eerie wind to raise my attention,
turning to my boy, “there’s a story I forgot to mention”.

We sat down near the river edge, to watch the oncoming train,
its smoke rose over the mountain, its weight already a strain.

I began to tell the tale, that my father passed on to me,
passed to each generation, since our family store come to be.

It began with bridge construction, horse and buggy ruled the day,
the townships were being connected, by iron without delay.

The owners were in a hurry, seems progress wouldn’t be stopped,
the bridge was to be completed, so they worked around the clock.

The massive engine arrived there early, its size widened eyes,
packed in the cars that followed, a large bank vault, and town supplies.

The railway owner livid emerged, from his special caboose,
“What’s the delay now conductor?” he moaned like a bullish moose.

“The bridge is not completed, we’ll have to wait a little while”,
spit the tobacco subordinate, to the boss so full of guile.

“This train’s to move by sundown! and that’s all the time you’ve got”,
the heritor slammed his door shut, horses spooked and now distraught.

The bridge crew were almost finished, when sun set that afternoon,
but the iron track wasn’t ready, as the train left way too soon.

The town gathered at the station, waving flags and cheering on,
then in a thunder jolting instant, the train was up and gone.

The valley drop was steep and sharp, gave accelerated speed,
the river below drowned out the sound, no warning for them to heed.

then brakes engaged like screeching nails, the thunder heard was numbing.
focused on the tracks ahead, they never saw it coming.

Years had passed in village mourning, when the bridge was finally finished,
seventy two people died that day, their essence never diminished.

It is said that when the sun sets, and angel rays touch the bridge,
you can see their silhouette’s, and shadows, there above the ridge.

Your great grand dad was there that day, just opened the family store,
he saved his money from the camps and laboured with sledge no more.