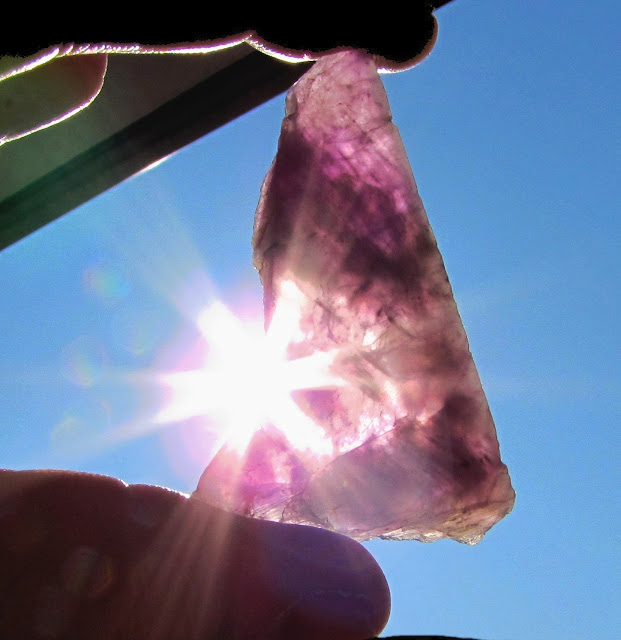 The beginning of a novel I am working on: "The Crystal Shard"


Surrounded by specks that mirrored and flashed the late afternoon sunlight, David Thomas sat there on a mound of dirt, digging, as if possessed by some inner knowledge for a forgotten treasure that lay hidden below this mountain of discarded rocks.


The cuts and scrapes on his fingers begged him to stop as he clawed at the layers of caked earth and sharp stones, but he was possessed by some blind intuition as if there was something there for him to find. As he dug, everything around him seemed to move in slow motion as distant memories shrouded in a dream like twilight played on his mind. One by one he recounted the series of events that connected him to this very moment, searching for some logical answer that put him in this place far from home. Every passing thought he recalled was somehow connected to this very moment. He felt déjà vu by it…as if he had been here before.


Moving from one thought to another, connecting this moment, David found himself in the middle of a tall Black Pine forest north of Superior, surrounded by Earth’s natural energy, and his sense of purpose. Everything seemed in harmony here, and it soothed his soul to be there. The air was cool and fresh with only the sounds of the wind at his back that carried the cries of a few ravens, sparrows, and the occasional tappings of a woodpecker. Glancing up only once or twice, he looked like a lone wolf digging anxiously for something that eluded him under the mound of dirt and rock that only he could sense but not get at.


Then, as if two powerful magnets aligned, his fingers found the face of a smooth polished surface. Could this be what he had been looking for?


In an instant, as if all the surrounding energies merged with his, a burst of life cursed through David as he quickly pulled the shard up from the ground and brushed off the mud to reveal what looked like a dark piece of glass.


Moving quickly over to a bucket of water, he washed the remaining mud off of the smooth flat surface of his find and raised it above his head into the air to take a good look at it. As he slowly turned and angled the violet glass into the sun, it cast rays of light all over the ground that seemed to dance and move in rainbow colored patterns as he angled it back and forth. The triangular shaped shard was flat and smooth with two jagged edges as if it had been broken off a larger piece. The third edge was perfectly flat and cut at an angle.


As the spectacle dancing before him engaged his thoughts, a bright warming light illuminated his face and a violet glow could be seen around the edges of the crystal. A calming flush of tranquility descended upon him and made him feel as if he was floating. The stinging pain in his fingers was suddenly gone, and for a moment he felt at peace within himself.


Pulling his gaze away, David put the shard into his shirt pocket. The moment felt so familiar, so distant, and yet, he knew he had found what he come here for.