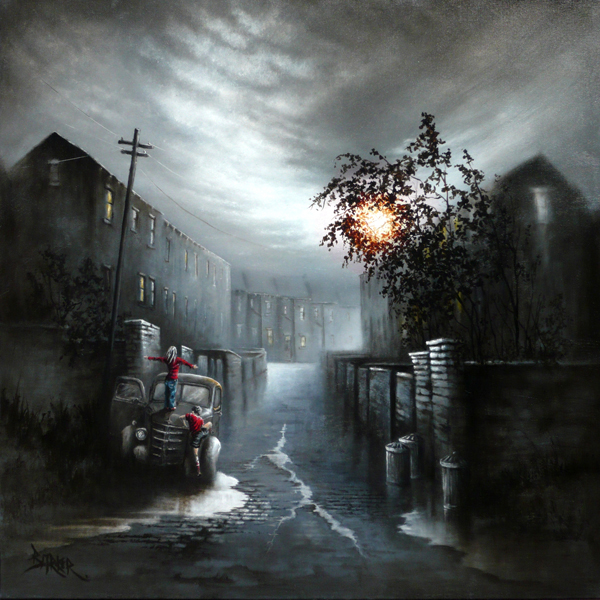 Stonefield, the home of my precious guarded memories and immortal youth; its been so long since I was home, so the first sight of the long row of tenements today, gave me a warm feeling with a little shiver as if I had gone back in time.

All my youthful memories came flooding back as I passed by the homes of friends and families I once knew, calling out the original owners by name as I drove by. They’re still there in my mind as sure as it was yesterday.

Down a small side street within our little village of row houses, was my destination and the place I called home, Barnsley Street.

Barnsley was on the outskirts of town and descended into a marsh that served as a young child’s hunting grounds for frogs and pollywogs but also for our tree forts and games of hide and seek.

The voices of children’s laughter and merriment echo back to memory and paint the scenes of a street I grew up on in the mid 1960’s as I emerge from the car and look down the road.

The long row houses on either side of the cobblestone street had small yards just big enough to hang the laundry to dry so most of our time was spent playing on the back street that declined into the marsh. When it rained, the water would pool at the bottom of the road, which is where the undefeated Barnsley Boat was. An old rusty 1939 P8 Plymouth automobile that was our unsinkable ship, a boat that won every battle it faced.

The old steel and aluminium garbage cans across the road served as the enemy ships and sounded lifelike when we made a direct hit with a rock. Many times the old Barnsley boat was hit by subs that silently snuck up on us with their torpedoes, but we always stayed afloat by the brilliant and magical engineering of our crew.

We played outdoors, morning, noon, and night and never came inside until family would call us in for supper.

August would bring the fireflies, an alien invasion by night that we and old Barnsley held off to eventually save the world…and at wars end, we decorated ole Barnsley for the victory parade that passed by an endless row of people on either side of the street and waved until our little arms grew tired.

The old boat belonged to Peters father, Mr Wing, who left it parked outside his gate after it broke down for good. That is, until one day, Peter who had just been in the marsh with his rubber Billy boots jumped onto the hood of the car and slipped off hitting his head on the road. I saw it all unfold as I had just closed the gate to my front yard when Petey called to me and slipped.

I quickly ran towards Pete but was beaten by the lightning quick strides of Mr Wing who scooped Peter up and brought him inside his house.

I stayed outside on his back steps worrying about my friend when a lime green station wagon ambulance pulled up, followed by all the neighbourhood kids running behind it. Concern was shared by everyone as I relayed the story to them…we all stayed there in Pete’s yard waiting for word…

Within fifteen minutes, which seemed like an eternity, the ambulance attendants and stretcher came out of the house with concerned expressions and a reply to our questioning faces, “Don’t worry boys, Peter will be alright, he just has a slight concussion.”

Relief ensued then as the group of us waited for the ambulance to pull away, and as it did, we all ran behind it to give Pete a protective send off as any good Barnsley crew would for their shipmate.

A week later Mr Wing had ole Barnsley towed away to a junkyard, a sad ending for our old boat and stalwart champion…

Old memories give way to the grey skies above and drizzle falling on Barnsley road. Our marshland now turned into a cemetery holding stones with the names of people I once knew, including Mr Wing and Petey, who sadly passed away last year in a car wreck.

Here now, a crowd gathers with black umbrellas in the cemetery, with a priest waiting for the last few of us to arrive. Tom Fisk, Dave Fallen, his brother Mike, and Sylvain de Bruit, whom I hadn’t seen in years till today…no one had changed, it was like we never parted, the spirit within each of them remained so recognizable…as if it was yesterday.

A melancholy atmosphere pervades the murmur of voices gathering as another soul from Barnsley Street is laid to rest. Ashes to Ashes dust to dust, we will all meet again here, to revisit our guarded memories.