A Sage in Song and Silence 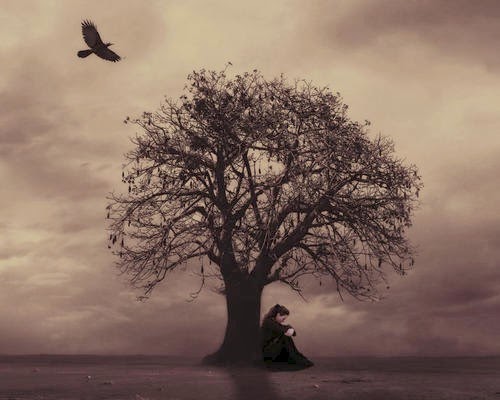 A Sage in Song and Silence

The morning skies were doleful, on my daily stroll today,
the breeze was brisk and biting, with clouds all made of clay.

Not all was sad and gloomy, as rays of light crept through,
its warmth gave me some comfort, against the grayish hue.

I walk to bring reflection, the convention fills my needs,
that ponders life’s connection, its nature and its deeds.

Glancing up across the green, old tree was in my sight,
its presence like a beacon, that called me to its light.

Drawn towards this ancient sage, I quickened pace with cane,
made my way to wooden bench, across the grassy plane.

Closing in on sanctum’s space, a melody touched my ears,
It made me feel so young again and shed my growing years.

I searched the grounds in wonder, for this voice serene and fair.
Its flow so captivating, it danced upon the air.

And there she was under oak, in arms a child she cuddled.
her soothing voice so peaceful, its tether oh so subtle.

Content for rest I sat me down, and listened to her singing,
to every note, every word, enchanted, I was clinging.

“Come back to me my little one, come back to mother so”,
and then a coo would follow, by her angel all a glow.

she paused for just a moment, smiling back at little one,
blessed by radiant aura, that touched her loving son.

But deepened sleep did follow, as baby’s eyes soon closed,
mother continued singing, as if slumber was opposed.

The tree that they were under, seemed advanced for winters sleep,
with leaves so full of color, drained by something deep.

Autumn was not too distant, but the leaves began to fall,
disturbing apparition, on this tree so tall.

Absorbed in graceful presence, I saw she began to weep,
her eyes were red and swollen, and baby fast asleep.

Inhaling deep she drew the light, from tree that they were under,
then more leaves fell upon them, as I stared at her in wonder.

And then I felt the shadow, hovering above the tree,
a form so dark and crooked, that reeked with malady.

It stared at them through demon eyes, its ballad was a squeal,
Darkness cloaked on raven wings, it came for souls to steal.

Shadows drank up all the light, in calm before the storm,
it sent a chill down through the tree, its bark no longer warm.

The baby’s smile disappeared, as demon’s eyes inflamed,
mother battled with all her strength to save the soul it claimed.

Her singing broke the shadow’s spell, her whispers like a sage,
the demons howl grew louder, its force now full of rage.

I moved myself between them, and cursed the shadows gall,
daring beast to strike me, I promised it would fall.

I called upon the light within, for power and connection,
to shield them both from darkness, provide them with protection.

then drew my cane into the air with crystal it concealed,
an orb of light emerged from it, extended as a shield.

the demon turned towards me, its glare did pierce my heart,
and then the beast descended, to rip my soul apart.

When light met shadow, a rift appeared, unleashing thunderous storm,
the door to all existence, then swallowed shadows form.

and just as quick, the sun shone through, the air was warm and still,
old sagely oak that clung to life, the tree no longer ill.

I moved towards the woman, her strength and face were bare,


but underneath the blanket, a waiting smile was there.